Michelle Ping the daughter of one of Ability’s Handlings engineers (Graham Ping) received a very prestigious award at the Military Awards Gala yesterday! She was recognized as the Reservist of the Year for her bravery and dedication in saving a soldiers life whilst under fire!

Michelle who is also known as "Mother" by squaddies sprang into action after the compound was attacked and she heard: "Man down!" She jumped straight on the compound’s roof where Highlander Craig Patterson had been shot in the head whilst manning a gun post on the roof, despite the fact that the Taliban were still shooting at the roof.

She said: "I thought he was dead at first and thought, 'How am I going to tell the boys?' Then I remember thinking, 'I'm not going to have this. I couldn't hear anything, my focus was on him. I got the boys to get him down off the roof and I patched him up.’"

Michelle, who signed up for the reserves after leaving the regular Navy in 1998, then helped soldiers to run Craig on a stretcher to safety over half a kilometer of rough terrain.

Michelle was also hailed by the 27-year-old Royal Prince Harry who sat next to her during the ceremony. She commented: Prince Harry came up to me almost as soon as he arrived and said, 'Hi Mitch you're sitting next to me.' “I couldn't believe he knew my nickname. It was just amazing.” 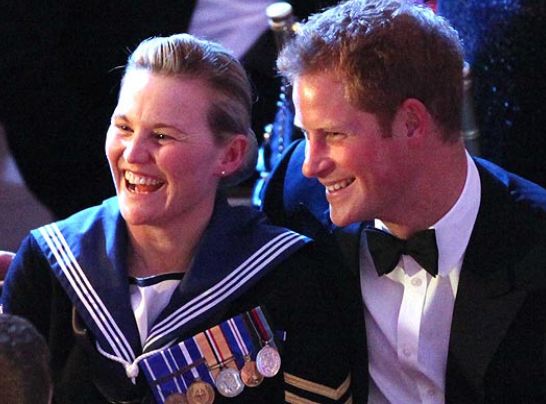 As she was presented with her prestigious award by celebrity chef Gordon Ramsay, Michelle broke down into tears she was unexpectedly joined on stage by the soldier she saved, Highlander Craig, and his grateful loved ones. Craig’s mum Alison, 50, hugged the paramedic and said: "It's amazing to meet you. I can't describe how much we owe you." He unfortunately suffered a brain injury that affects his movements but is grateful to be alive, and commented: "Michelle saved my life, definitely."

Michelle, described by top brass as a lioness protecting her cubs, cried as she replied: "Oh my God, this is the best day of my life. I'm so happy to meet you both."

Holding her award aloft, she called it "incredible" and added: "Words can't describe how I feel right now. Talking here tonight is harder than facing the Taliban.

For more on this news story and the awards ceremony;

We are incredibly proud of Michelle and will be tuning to ITV1 at 8.30pm tonight to watch the awards ceremony!